When looking around us, screens are a large part of our society that we generally overlook. But, when we start paying attention, you begin to realise their role in society. After our lecture on Media use and Public Spaces, I began to take a step back and look at how people interacted with their screens in various settings. 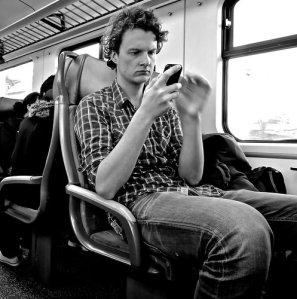 One of my first observations was how people interacted with their phones on the bus. I catch a bus too and from university so on my way home, I looked up and down the bus, and I noticed that the majority had their heads stuck into their phone screens watching or looking at something much more entertaining. A large portion used earphones to drown out the hum of the bus and the few conversations that were to be had with friends they happened to have along for the ride. I must admit, I am usually one of the majority when it comes to reaching into my pocket for my phone to escape the possible interaction with people I am unfamiliar with, and it made me wonder, what people are actually using their screens for?

Are people so scared of talking to someone new that they will bury their eyes into their phone instead of enjoying, not only the view but, people around them? Well, I guess from my own experience and conversations with others, that this could be in fact, true.

It is very unlike the meet-cute situations you see in stereotypical rom-coms where you bump into someone on the street or on the bus and a whole romance starts. In a realistic society, fitting today’s way of life, it is more likely you would bump into someone due to either party or both being engaged in the screens around them instead of the world. So what is the purpose of screens, social media, smartphones, etc.? 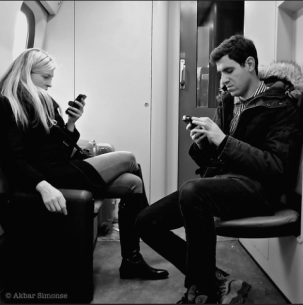 In an article written by Jursland and Denstadli, they describe the uses of smartphones and tablets on public transport (2017). Many people use their phones to utilise their time on public transport and make it their own space. They note that many people that carry a form of screen with them on public transport such as a laptop, phone or tablet, often have a more positive outlook on their journey. However, an intriguing study Jursland and Denstadli reviewed as a part of their paper, described that mobile technology created a sense of isolation and that having a connection with another on the bus or train, left them in a more positive mood (2017).

Screens are around us everywhere. TV, smart fridges, on University campus, wherever you look, it won’t be hard to find a screen. Yet, with screens becoming a part of our daily lives, many are still against them and worry about their potential dangers. Moral panics surrounding new technology is not uncommon, (see article here for one of many perspectives on the matter) but there is a battle for both sides of the argument. Where do you stand?